INVISI-GARD Security Screens offer an unparalleled combination of security and clarity of vision. Constructed from aluminium and marine grade 316 stainless steel, they also use a unique, patented INVISI-GARD Pressure Retention and Isolation Method, which ensures the door’s mesh will defy even the most determined attack. Whether it’s from an intruder or corrosion! 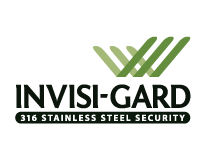 INVISI-GARD Stainless Steel Security products don’t require screws or any other form of mechanical fixing to secure the mesh into the perimeter frame. As a result, the potential for corrosion through dissimilar metal contact is avoided.

Tested and approved in accordance with Australian Standards, INVISI-GARD delivers confidence in security across a wide range of products suitable for residential and commercial applications: